There is no telling some people! 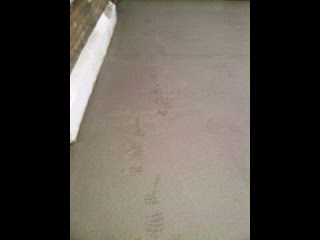 Nope for once this isn't about my family, this is about the idiots that insist on walking on the wet concrete on the new driveway. Its not rocket science, if the slab was not there the day before, it will probably be wet. The planks laid across it are the second hint that its wet... But no, none of this was enough.

Over the past couple of weeks they have laid concrete on 5 days, on each of those days someone walked through it every time.

Today they laid the last slab, and refinished the whole driveway. Not content with walking through the newest piece, they have also walked right across the whole thing for about 20+ ft, so messed up the refinish too. Well done, that's outstanding!

I'm sure by tomorrow, the barrier put across the drive will be moved and they will park on the drive too. Like I say, No telling some people.

Irritating really, having had such a crap driveway for years, I really hoped everyone would give the new lay a chance, so we had a nice driveway.... But no! 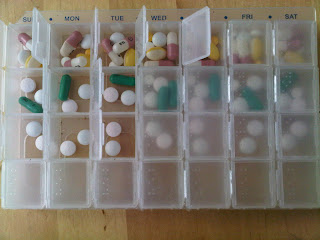 The daily regime of pills for mum. Not sure what's harder, being responsible for sorting them all out and administering them at the right times..... Or being the one taking them.
Regards
Michael

Sent using BlackBerry®
Posted by Michael Snasdell at 8:50 AM No comments:

The eagle has landed...

...Kinda!
After a bit of trial and error yesterday, experimenting with different ways of getting on the bath lift, and building her confidence.... Mum has officially landed in the bath.

Although not without lots of drama, but that's my mum right? She told the carer on her arrival she would be having a bath today, and they set about getting it all sorted. I had already set the lift up in the bath to save some time. So they ran the bath, and started to get ready. Finally it was time, and I heard mum exclaim from the bathroom, "what's the matter with this thing, its never been so slow before, the bath will be cold by the time I'm in"..... This is her first day using it! Lol

So either way, that's a HUGE hurdle overcome to say the least. She is in the process of working out how to wash her hair between her and the carer. Fingers crossed by the end of all this she will be a happy woman for the rest of the day. I can hope anyway.

So with that sorted, and a somewhat more positive spring in my step, maybe I will achieve some good things today. Having successfully cancelled two phone contracts yesterday, in my on going money saving exercise, and getting mum a new temporary hearing aid until her appointment on the 11th Jan for her new one, I'm not sure what other great things I am left to do now lol.

I know I have a few little chores left to do, so will try and recall what they are and get some of them done. I have my goodies from IKEA to fit yet! Woop!!!

On another note, the driveway we have been having laid as part of the renovations is almost done. Fingers crossed it will be finished laying today. I hope this time no one walks on it. Every time they have laid a slab so far someone has walked it it.
They have cut a few corners on the original plan, but its still a vast improvement on what was there. Goodbye sweeping curve, hello straight lines and angles corners.

Right, I'm rambling, so I'm off. Gonna try and get the dogs walked this morning, all positive!

Have a good day.
Regards
Michael

Sent using BlackBerry®
Posted by Michael Snasdell at 8:28 AM No comments:

Well its sure been one of those days, from the low of the morning encounter with mum, and the rage that followed, to the high of speaking to Karen from St Christophers.

Its amazing what a single conversation, albeit a long one, can do for your state of mind.

When she came to see mum today I was happy to have a fresh perspective on things. A different pair of ears to hear her gripes and comments on things, and then compare their feelings on the matters with me.

When it came to my turn to speak to the nurse, almost immediately she identified that I was feeling a little out of my depth. We discussed what was available and it has been decided that I will see the family worker/counsellor to talk through my feelings and fears, as well as anything I am subconsciously struggling with.

Mums meds will now be taken care of by the pharmacy, who will put them in doses so that's one less thing for me to worry about. After that conversation with the nurse I managed to be calm enough to talk to mum about the bath lift, and got her to try it out and find a method of getting in and out of the bath, so another hurdle overcome.

That's not to say a lot of negatives were not raised in her conversation with the nurse. I did feel rather bruised by the time she had finished talking with her, by some of the comments mum had been making about how things are.

I have asked for a wheelchair for mum, so I can get her out and about a bit more. The back garden and the walk to the doctors must get a little boring at times. Hopefully we should be able to collect that soonish.

So the day ends quite well, even talking to mum about taking a sleeping pill for the trip to Wales to see her sister, so there is hope yet.

Bad start to the day

So for days now I have been building up to today, getting back on track, making a plan etc. But as we all know even the most simple plans fall foul of life itself.

I woke this morning.... With a headache! Great start. So the plan was, let carer in, take headache tablets, ask not to be disturbed unless it was important, then sleeeeeeep!

So I toddled into mum to see if all was well this morning and to tell her of my plan. At first all was well, she said get some rest, and that she would like to try doing her own lunch today to give me a break.... Awwww.

Then as I left the room she asked if I had bought her any cigarettes yesterday. Having not been asked for any, the answer was obviously no. To this she got very mad, shouting and complaining that she had specifically asked me to get her some.... I left the room.

For the next few minutes she huffed around the house getting upset, and I sat pondering how I would work this out. Carer due at 8am, I have to keep the dogs away from her. Now just before 8am, did I have time to run to the shops? Typically the carer ran late today, so by 8.05 I ran out the door, only to meet the carer half way up the road. I explained the situation and continued. Home minutes later, I let the carer in, put the dogs away and looked for mum. Finding her in the back garden..... SMOKING!

PS trying to decide at present if I can be bothered to try and sleep this headache off once the carer has gone. Or take the dogs out and hope fresh air does the trick.
Regards
Michael

Sent using BlackBerry®
Posted by Michael Snasdell at 8:31 AM No comments:

Well as usual its been a long time since I last wrote anything, hot and cold, that's me. Anyway, let's get up to date shall we.

So since I last wrote a lot has changed. The biggest bombshell being mum going back into hospital. She had let herself get in a terrible state, and finally we had to make a decision for her.
A day or so after going in, I was summonsed to the hospital by one of her doctors for a sit down chat. The cancer has now spread to her lungs and brain, so time is suddenly much shorter for her.

She was in for about 2 weeks, and in that time I was also having a massive amount of refurbishment done in the house, so life was hellish to say the least.
During this time, the NHS, and St Christophers Hospice did an amazing amount of work, putting in place loads of equipment for her including a motorised hospital bed, motorised rising chair etc. Meanwhile we laid laminate flooring throughout the hallways to make walking easier.

So mum is home now, slowly adapting to a new way of life. Less balance and reduced mobility. We now have a carer come in twice a day to help mum wash and dress, the bits I can't really help with. I would like to say its made things easier, but that's not really the case. Tempers are short in this house these days.
Yesterday brought it all to a head for me, with mum getting angry about her medication and how I was getting it wrong. After trying to explain what was what a couple of times, she started shouting she would sort it for herself. Sadly she doesn't know what day it is, let alone what drugs she should be taking. She swore blind that the hospital had told her to stop taking 2 of them... Which they had not.

So I am slowly coming to terms with the fact that I'm in a pretty cold and dark place right now. I am off sick from work with stress and depression, on some mild medication to try and level me out, and struggling a little with day to day life at the moment.

I need some structure back, a routine, something to keep me occupied and my mind away from stressing 24-7. So I'm trying that from today. Hoping to get the regular dog walks in, and reach out to a couple of long forgotten things to keep me ticking over.

Meanwhile, the pity is not with me, its with mum, and for her suffering through this all. I know she just wants to throw in the towel some days, but other days she is happy as anything. When her health slips she tries to avoid doctors, but each time they eventually fix her up again. So we just have to stay on top of all of that. And keep her in the best possible health.

Posted by Michael Snasdell at 8:52 AM No comments: