Now I know I am over simplifying this, and things are far more complex than meet the eye, however I wanted to put something out there. Something many others have probably thought, then dismissed as a "it will never happen, so why bother asking" moment.

Years ago there was a push to get more people cycling in London. Commuting, short journeys and even sight seeing. There was clearly a need to give people a way to do this with ease. Along came the Boris Bike / Barclays Bike / Santander Bike, bicycle hire scheme.
Bikes, complete with infrastructure, a support network and an easy to rent system. The idea was a huge success and continues to grow.

Now we find ourselves at another fork in the road, this time it is cars. With rising levels of pollution, and falling target levels, it is getting to a critical point now where something has to change. So I am led to believe at least. Introducing the Ultra Low Emissions Zone or ULEZ. 15 years on from the Congestion Charge being introduced, another zone is being set up. Again it is emissions based, and all older cars which are Euro 5 or less will find their journeys costing a levy of  £12.50.

This new measure comes into effect in April 2018.
The issue here is, the alternatives are find a public transport route, and fall foul to the over crowding, unreliability and inconvenience of public transport, or "simply" replace your car with one which is exempt from the charge. You know, that money you were saving for a rainy day! For those without saving, or unable to get credit to buy a new car, which of you believe the figures touted about by the Mayors Office for people earning below the "Living Wage",  it will be quite a lot of people paying £62.50 a week or £241 a month to drive their car into work in London.

Funnily enough, if you were to lease a new EV, you would probably spend about the same sort of money per month. The differences being, the car would be new, and the air quality would be affected positively by the change of vehicle.

So here is my question. Would it not be sensible to roll out a government incentivised rental or lease scheme to these people, and anyone else wishing to clean up their journey?
It is all well and good saying that the revenue from the ULEZ will go into sorting the issue out. But surely as long as you allow the cars to keep making the journey, regardless of the levy imposed, the pollution levels remain the same?

I find it hard to believe that a bulk purchase of EV's for short use journeys, similar to ZipCar would not be positive both financially and for the air quality. Surely using the bikes as a business model, there is gain to be had. Because of the introduction of these vehicles and their use, the infrastructure such as charging points on the streets and in car parks would be encouraged to increase also. Using existing parking structures  for rental locations would make them more secure, easier to find, and easier to park when you reach the end of your journey, much like the bikes again.

For the long term users, who use a car daily for their journey, and would incur the maximum wrath of the ULEZ, but are unable to lease via more established methods such as private car leasing schemes, maybe such vehicles could be made available on a month to month basis, and returned to the pool of vehicles available for rental if their monthly lease is discontinued.

I know this is all pie in the sky, and easy to say without knowing the numbers, but the facts are simple.
With the push for more people to move over to EV's, the infrastructure is far too weak to support it right now. If 10,000 people bought EV's and started driving to London daily next month, there would be a severe lack of charging points etc. A scheme such as this would get the ball rolling surely.

Seeing more EV's on the road, and the support structure in place would surely encourage those who need convincing that EV's are the way ahead.

And most importantly, the change of vehicle, rather than the financial levy, would improve the air quality for all, which is the end goal here anyway, right?

Given the choice of paying £12.50  to drive my own car, for a short journey in the ULEZ, or using a newer, smaller, easier to park car into the ULEZ, I know which I would prefer. Best part being, if I decide to go drinking with friends, I can get a train home and not be tempted to drink drive to get MY car back home.

So many positives. I am sure with the buying power of a national or local government, the prices the vehicles could be secured for would be way below private consumer prices, not to mention the lack of taxes on the new purchase. Given that medium sized companies are able to secure fleets for silly low prices, I don't see why this would not be viable for a similar or lesser cost than the ULEZ charge, while being cleaner. Did I mention it would cut pollution, and quickly?

So there you have it. My idea.
Posted by Michael Snasdell at 3:10 PM No comments:

I have been pondering for the last week now about how to verbalise my cycling goals for 2018, without sounding like they are some sort of resolution, or set in stone target. After much consideration, I thought I would put it all in a blog entry. One I can come back to this time next year and check how I did. As well as visiting throughout the year to check, and update.

This is my 3rd full year of cycling for leisure, and my first year of commuting. I started commuting around March 2017. Looking over last years results I was pleased to say the least. A huge jump in totals. Over 3,500 miles, 105,000ft of elevation, many hours and so on. In short, smashed it! 2,000 miles alone was commuting.

However it is worth noting that for 17 weeks of the year, through illness and laziness, no cycling happened. In total I rode for about 170 days out of the 365 available. So statistically I could have doubled my mileage. However I am not that naive! In reality I could have done more, that is the long and the short of it.

Before I get on to this years goals, I just wanted to add that after much back and forth at the hospital and specialists, I have also been given the green light to start running again. So some time and energy will be expelled getting back into shape, which in turn I hope will help with my riding. Fingers crossed, no injuries this time around, now I have learned that I need to take it a bit easier.
I have also added a Tacx Flux to my cycling equipment list, so during bad weather, or when the mood takes me, I can get some proper miles done indoors, rather than looking out of the window and saying sod that! Less excuses!

Mileage of about 4,250 would be nice. Based on last years numbers and available ride time, it should be doable. As the year progresses, we will see, but I am hopeful.

Distance rides. I have never done a 100 mile ride, so I thought committing to doing 4 this year was the way to go. I don't think the mileage is really an issue, as long as the route is right. 76 miles with 4,500ft of elevation is my longest yet, so 100 with 1,000ft should be fine.

Gran Fondos. I hit a few last year, and one maybe two in 2016. This year, I want them ALL! One every month would be lovely. Although maybe a bit unrealistic, we shall see. I am aiming for one a month for now.

Power. This is a tough one for me. Breaking a lot, and hurting myself by pushing too hard has become a common occurrence for me, so I have slowly started to learn my limits. However I DO like numbers, so hitting a few power figures is never a bad thing. Now I can do this indoors, in the comfort of a controlled environment, I am happier pushing a bit here and there. So have set myself some power goals which are within reach of current achievements. But when it comes to FTP , I am less interested. I like to see what I do on rides. When I feel like pushing, I like to be able to.

Climbing. One of my weakenesses, and something I am slowly addressing. With the last ride of the year being on a single speed 48/18 Langster, and being 40 miles, with 2,250ft of elevation, I am happy with my progress for sure. But I want to improve here. Having downloaded the two Top 100 Climb lists on my phone, I have already started on them, and hope to tick off as many as I can this year. So getting my climbing legs on is key. Obviously being almost 250lbs, climbs are a battle against gravity. So hopefully the small life style changes will drop maybe 10% off that number during the year.

Sportives. A few events this year will make me happy, with some official recognition of my commitment to the sport. Just enough to keep me grinning. London to Brighton, Cotswolds, Ride London 100, and Hayward Howler are all lined up for now.

So that is about it for now.
Improve power to assist with climbs. Cover more miles, including more elevation. Longer rides, some being sportives.

Oh one final thing.
My aim is to ride (any distance) for as many days as I can this year. My Veloviewer and Strava infographics look a bit lacking from last year, so this year, I will fill in more spaces ! 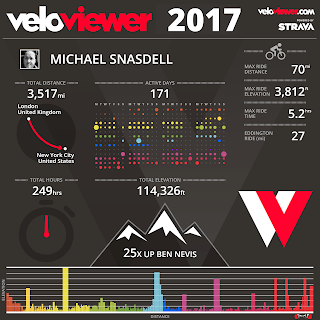 Posted by Michael Snasdell at 5:32 PM No comments: