A few years ago while on holiday (vacation) in Florida, I just by chance caught a commercial for a show coming on TV, called Ink Master. I have always been a fan of good ink, so I decided it was a must watch.
Sadly, being on Spike, it was unlikely to be showing in the UK any time soon, so torrents became my friend.

Season 1 was cool, interesting, slightly fake as most reality TV is, but well worth the watch. Season 1 finally made it to air in the UK this year (took a while)
Meanwhile the seasons rolled on. Was always great to see differing styles and techniques. The art has always fascinated me, and I have always watched closely when being tattooed.
By season 3 I was a verified addict of the show, and when it came around to the artists on the show this time, wow... The bar was raised and some of the artists were mindblowingly talented.....Others, hmmm not so much.

By midway through the season 2 people really stood out, Craig Foster, and Jime Litwalk. It wasn't just the art work, or the ability to turn it into an amazing tattoo, but also the persona's. Both guys really stood head and shoulders above the rest, and were for sure my favourites to win. Sadly it wasn't to be, but the fuse was lit.

Checking Instagram and Twitter I found both Craig and Jime, and decided it would be stupid not to try and get in touch and get a tattoo from either or both. Becoming almost a friendly stalker from another continent I set about seeing if I could get a sitting with Craig on my next trip to the US. The seed was planted, the idea in place, but would the timing be right.
As the date grew closer my hope faded a little, as if I would be so fortunate. However, at the last minute I received an email from Craig to say he could fit me in for a piece the day after we landed in Florida. Naturally I jumped at the chance. 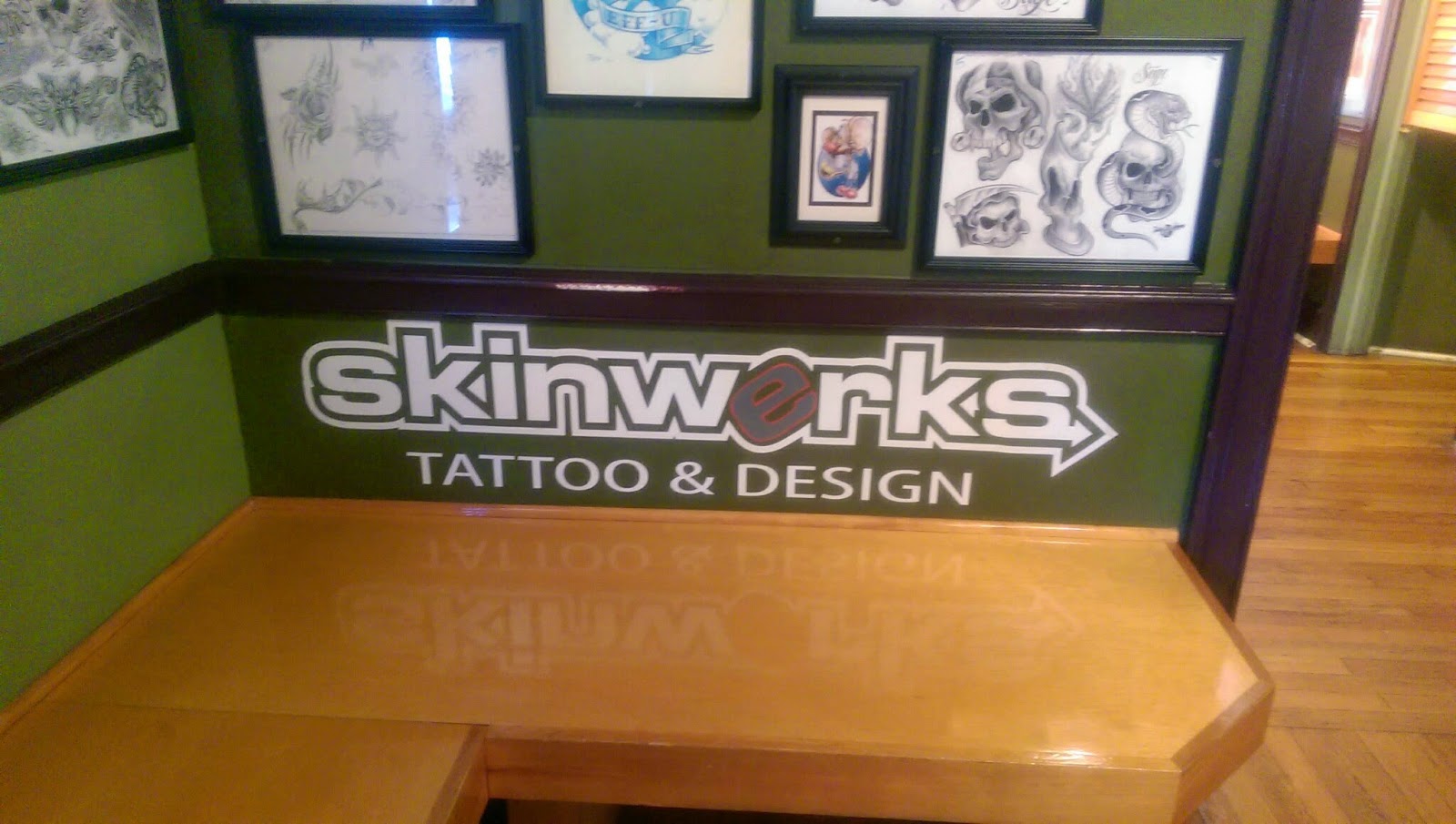 After convincing the girlfriend that the morning after a 9 hour flight we should get in the car and drive 500 miles to the north of Georgia, it became real. Yesterday morning we got in the Mustang and set out. Arriving in Carrollton, Georgia mid afternoon and checking into the Best Western, it was almost time. A few hours of being looked at in amazement by the locals for speaking in a foreign tongue, we rolled up to Skinwerks. Craig was outside chatting to friends, so we went in and got started, form signing etc.

When Craig came in he came straight over to introduce himself and get started on the decision making of what I wanted etc. The answer was simple really, a Snactoo drawn by Craig with a personal touch added to make it a fitting tribute to Graeme. Picking up pencil and paper the tattoo was being designed before my very eyes, and in no time at all, there it was! (Below Graeme Breen) 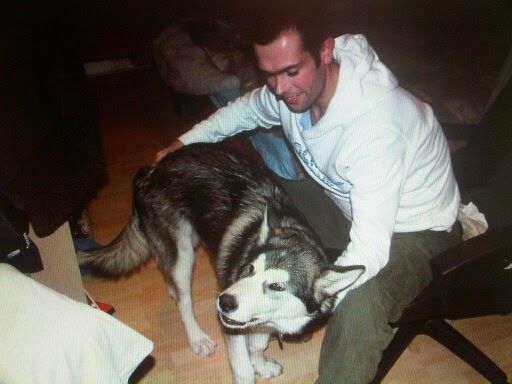 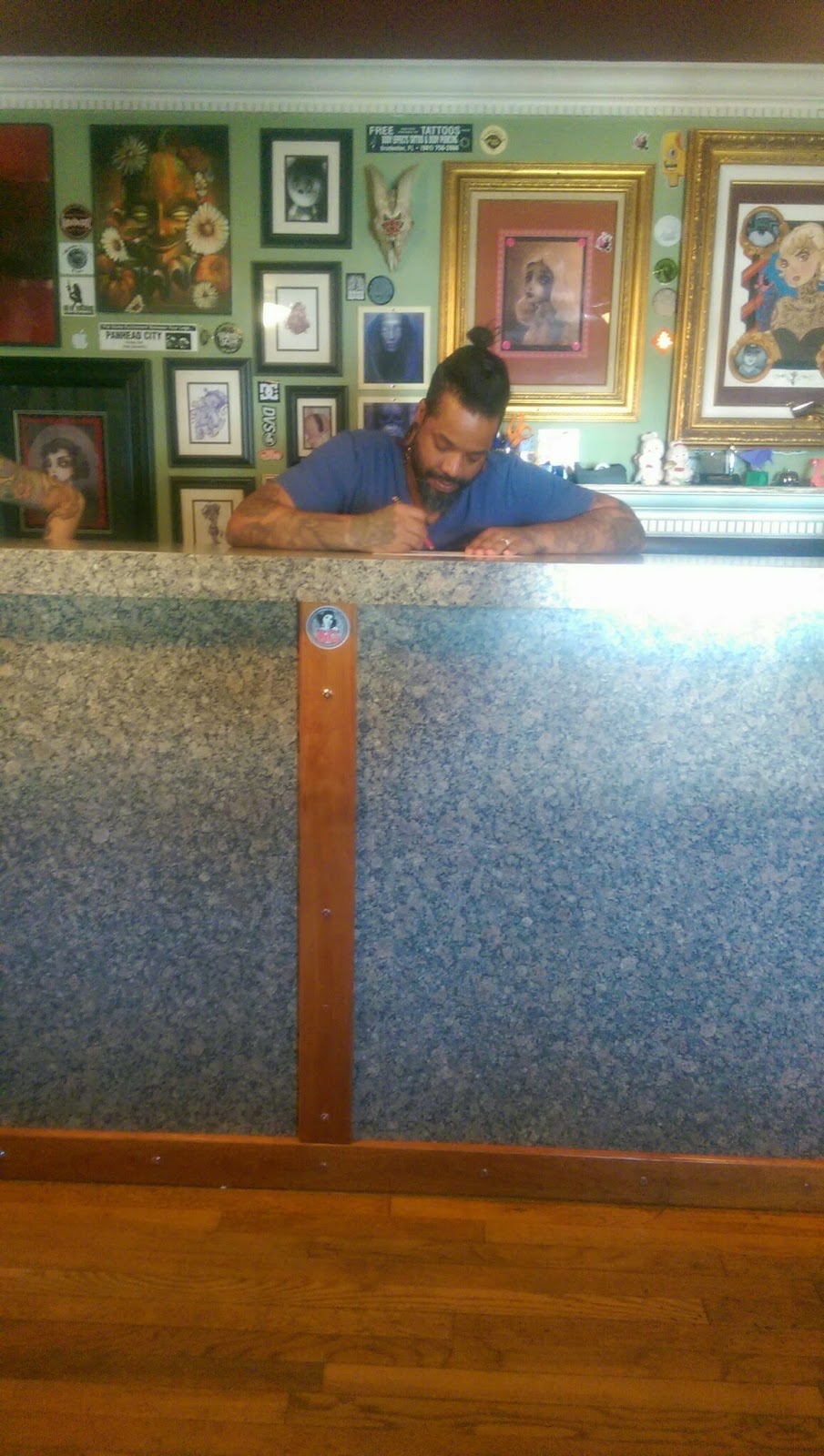 After a short time studying a Gummy Bear and drawing... 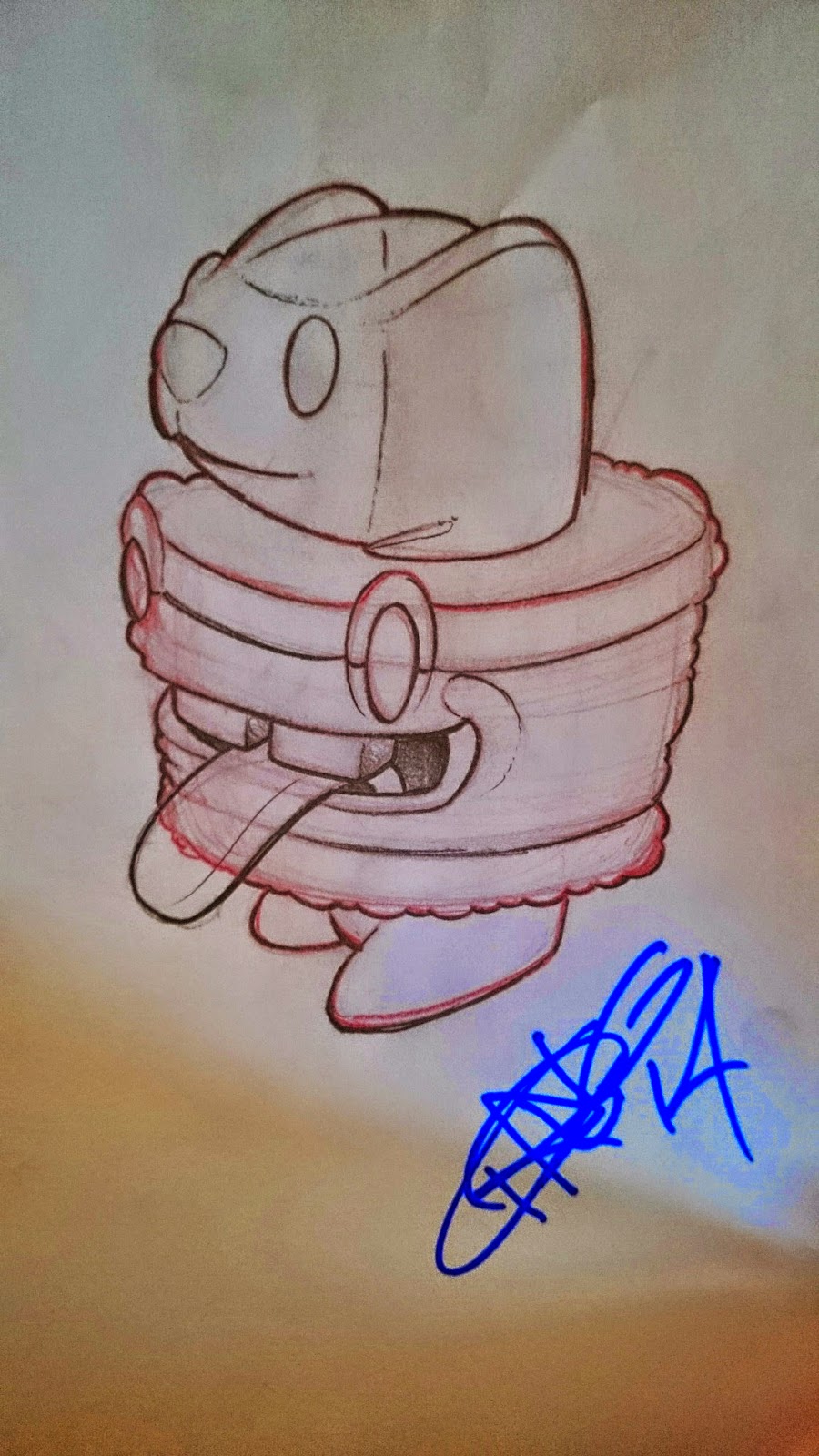 Off to get it turned into ink now.
Walking into the studio the atmosphere was so relaxed it was unreal, was like being amongst friends. Calm conversation soon turned into fierce laughter and memorable moments of hilarious stupidity, which really made the experience all the more fun. After some set up and prep it was time for the stencil and lining, the moment I had been waiting an eternity for. 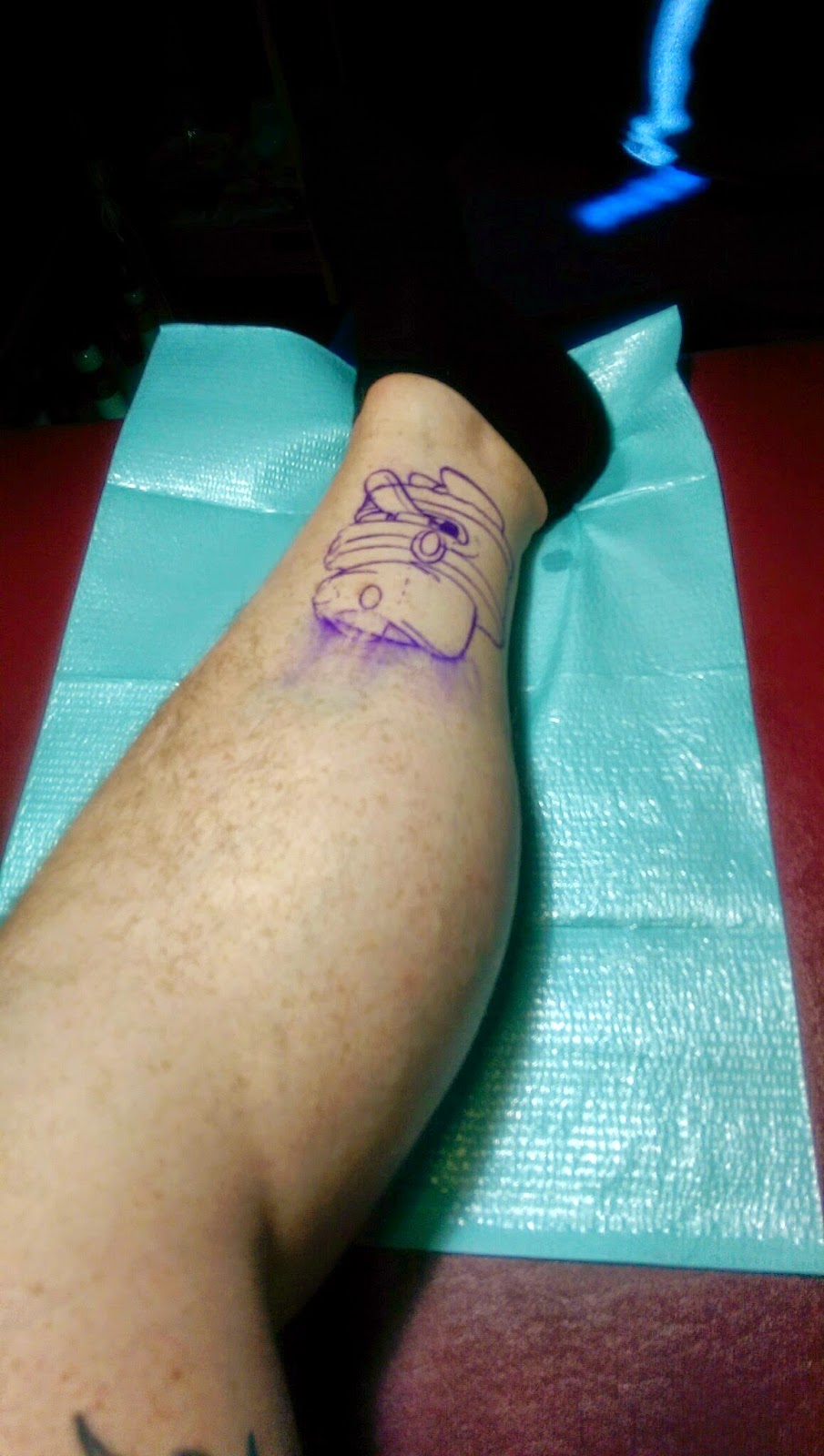 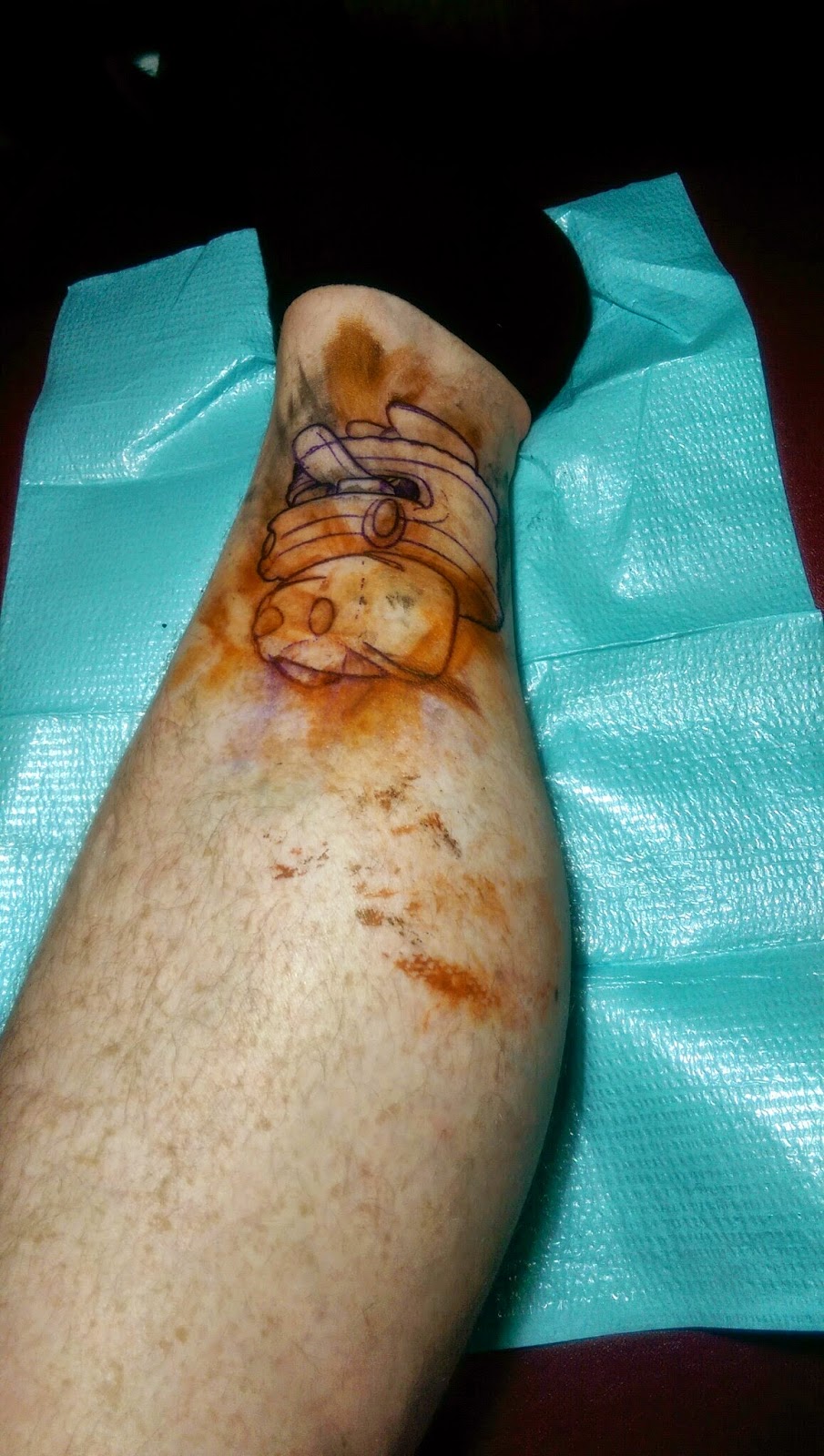 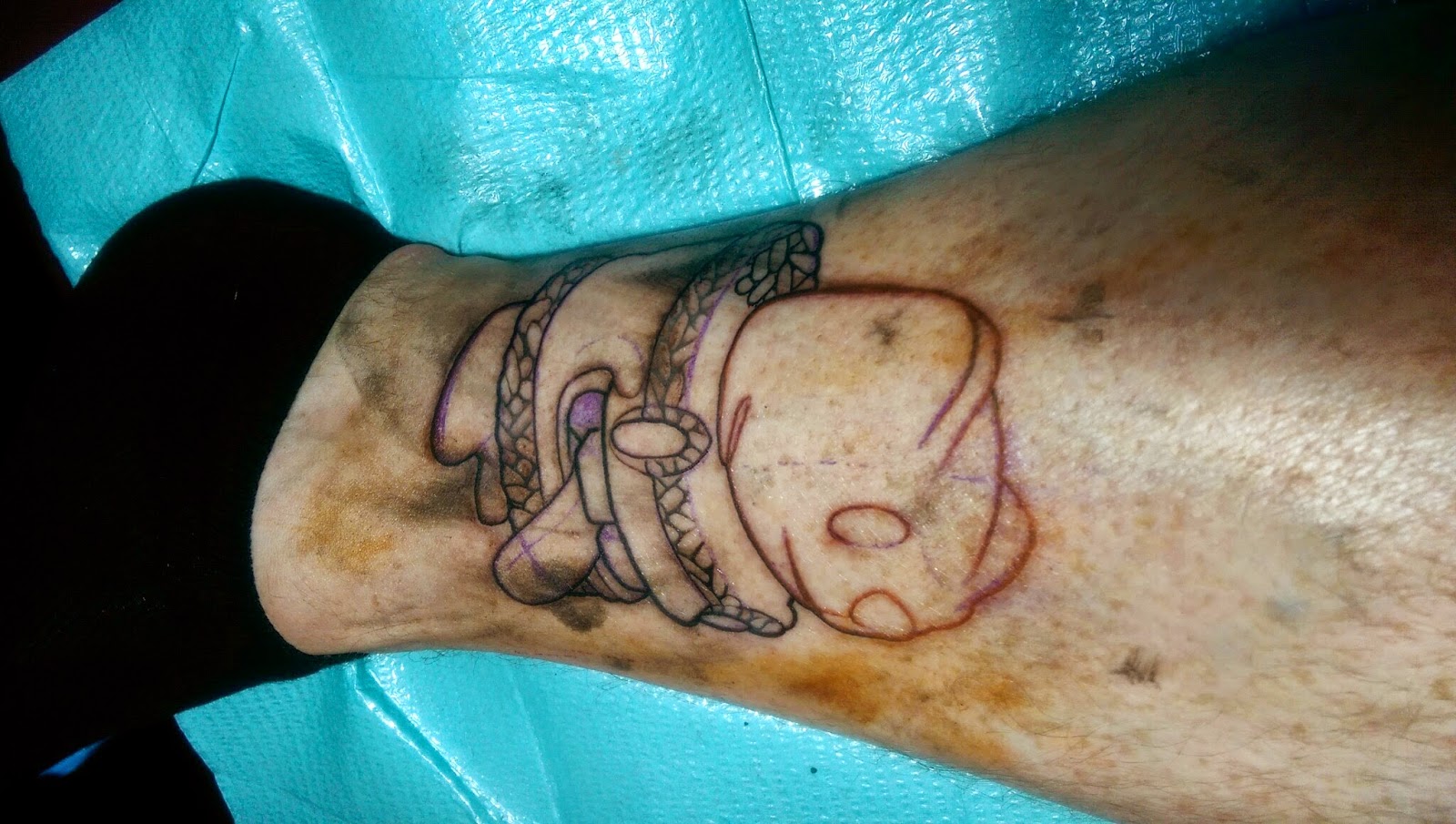 The experience to this point was already quite surreal, but watching what happened from this point on was crazy. Sitting, chatting very openly, getting to know the person I had seen for so long on the TV. I apologise to Craig at this point if we were going over things he has said a thousand times, but the conversation was riveting and very interesting indeed.
The colour started flowing, and before long a few flat lines were coming to life. 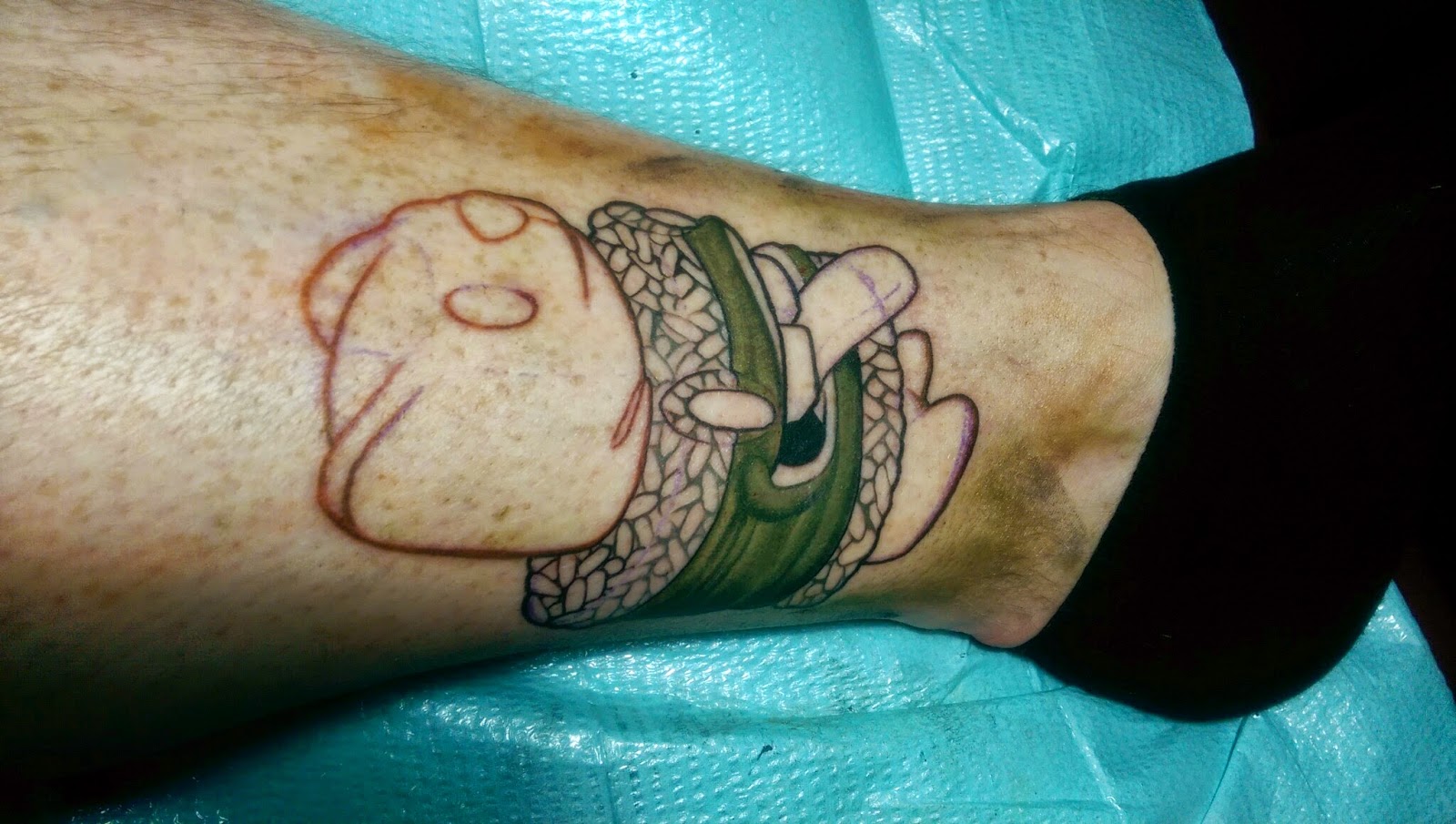 Time flew by at this point, and in what seemed like no time the job was done, and I was dumbstruck. At no point was colour etc discussed, I simply wanted my few ideas put into a design and realised by Craig, no more no less. And what I got was my mind blown. 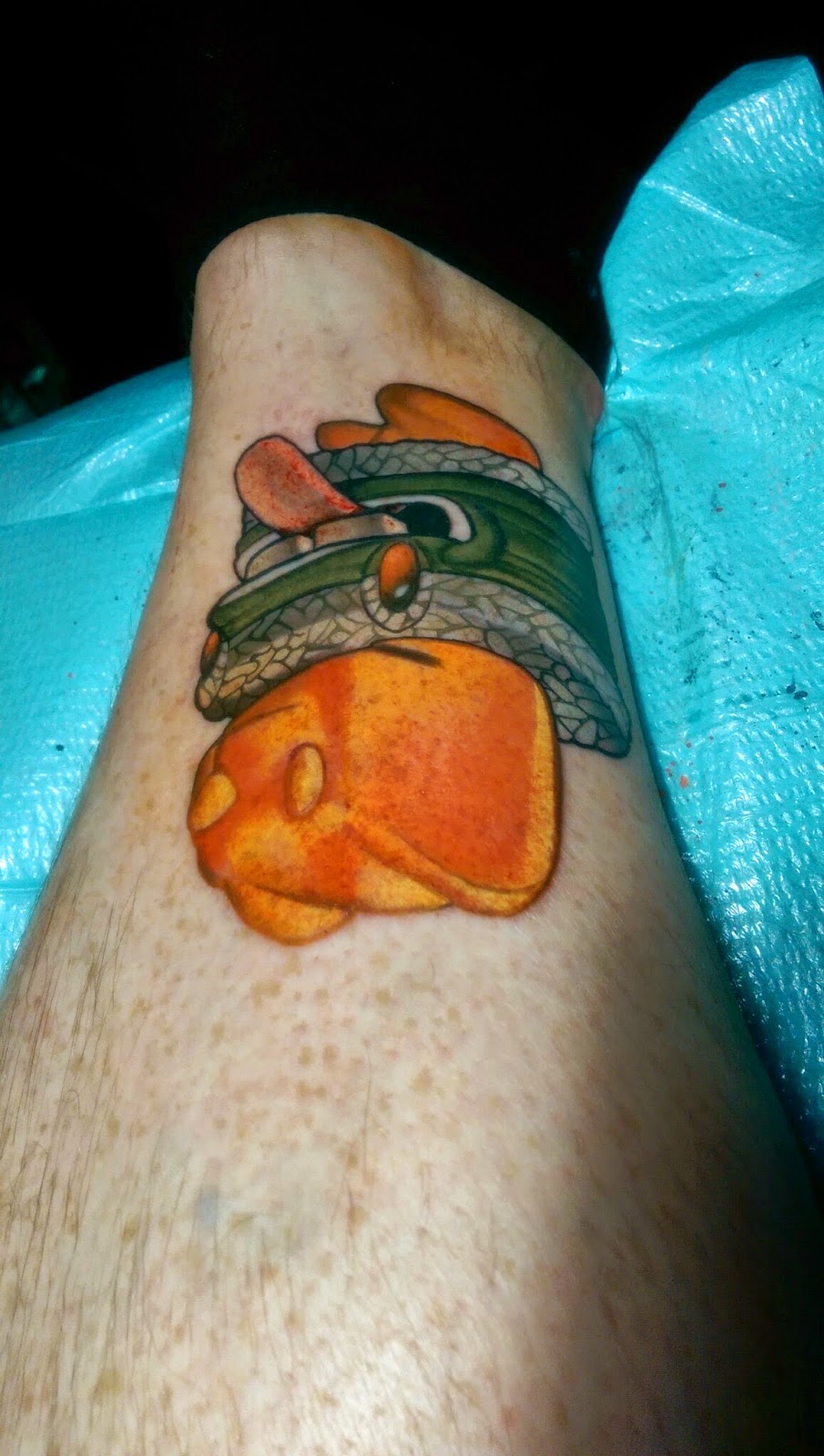 Once the tattoo was done, and the whole visit started to wrap up, it all suddenly became very real. I had spent the last few hours in the company of an artist I truly look up to and admire. In a business where everyone is an artist or a critic, it is somehow refreshing to connect with someone, discover a mutual respect, and come away feeling wiser and richer for the experience. Rather than exhausted and confused.
As the evening had gone on, it had become more and more apparent how lucky and blessed I was to get the chance to share company with, and get ink from such a genuine and lovely guy. As well of course two of his crazy friends and my wonderful girlfriend.

Once back at the hotel for the night, and not murdered by the maintenance guy,(private joke) the full impact of the past day hit. From a long day flying from the UK and getting to the house, a few hours sleep then in the car for 7 hours and 500 miles, then spending the evening at Skinwerks... It was time for a leg wash down, a coating of Hustle Butter and some sleep.

Here it is, close up. 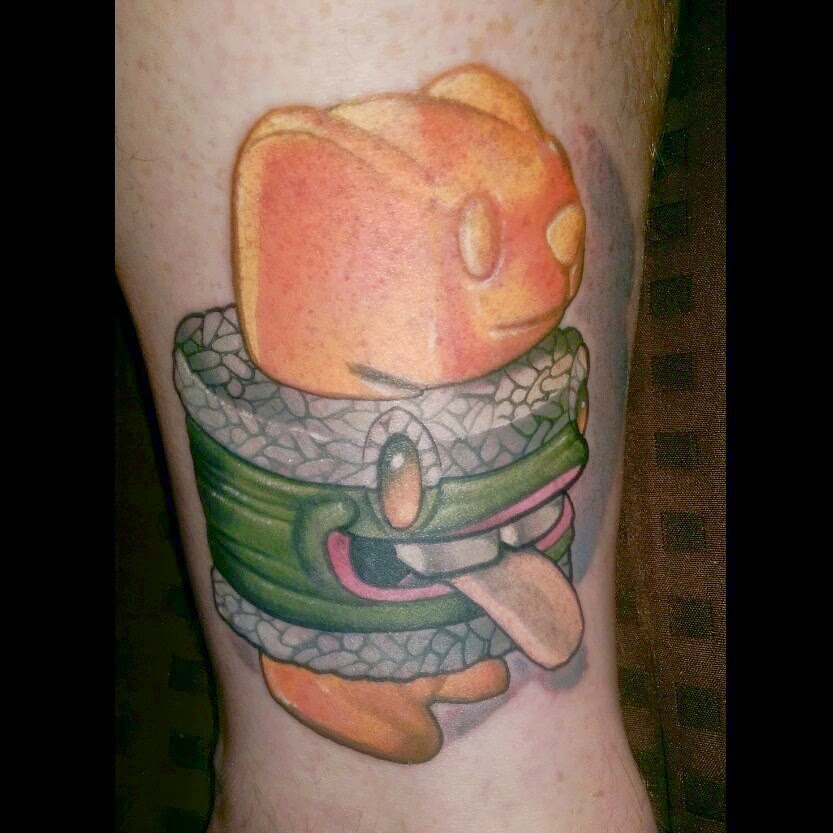 So, without boring you any more, thats my trip to Skinwerks story.
The moral of which is simple, dream hard enough and things WILL happen... And of course, sometimes, you idols and heroes are just as cool in real life as you imagined they would be. Craig Foster is most certainly one of those people, and the guys and girls at Skinwerks are fantastic, so thank you all.

I am sure I will be back at some point to get some more ink as Gummy Sushi is gonna get lonely otherwise.
Til then, I will give your brain and twitter a break Craig, but thank you for everything.

PS, I have to add. Not content with making my dreams come true, Craig has gone beyond awesome and helped arrange the chance of my girlfriend getting ink from Jime too... Does this vacation get any better? 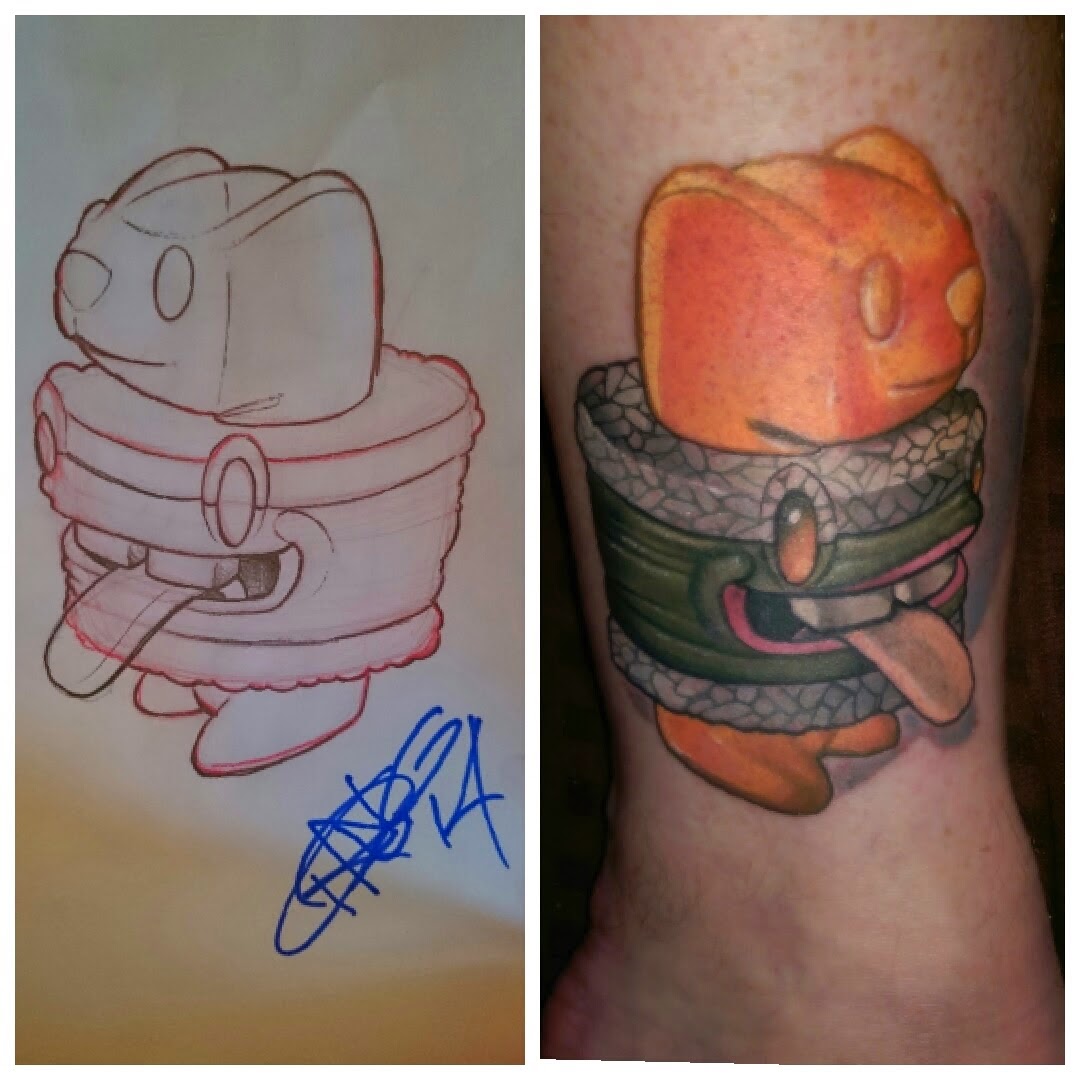 PPS, sorry for the awkward rotations on the pictures, I will get them sorted soon.
Posted by Michael Snasdell at 11:48 PM No comments: