Parking tickets. My feelings on them.

A while back, Nov if I remember correctly, I was issued with a PCN (parking ticket) from Bromley's parking enforcement people, for apparently parking in a clearly signed CPZ (controlled parking zone). I appealed against this on the basis that I felt the signage was so poor that it was not enforceable, as I had not been correctly and adequately made aware of the restrictions of the area I was parking in.
This argument was backed up with photographic and video evidence from myself. And also further supported by  the contradictions of the letter rejecting my appeal, and the actual signs which exist.

The appeal was rejected on the grounds that they felt that the area was sufficiently signed, and I was informed of locations of these signs.... which DON'T exist.

So as the argument has gone on, I started to question the validity and point of my appeal. Was I just doing this because I didn't want to pay.

Well, all my questions were answered this morning when I received a letter from TfL advising me of a parking penalty on the A205. On checking the details, and thinking for a moment, I did indeed stop there, and realised in a true 'DOH' moment, that I had been out of routine. I would usually stop there briefly on the way to physio after 10am, but on this occasion I was going to an earlier appointment, and it was pre 10am... Silly error!
I drove past just now to check the bay was indeed 10-4, and it was, so I went straight online and paid the fine. Which I should point out is the same price as Bromley's demand.

So my relaxed attitude, and acceptance of wrong doing of this TfL PCN clears up the doubt. I have no issue whatsoever paying a legitimate PCN when it is signed but I have still been stupid, however when a council is too tight, and too arrogant to accept that they don't have correct signage, and just throw their weight about with hefty fines, I take offence, and WILL object!
Posted by Michael Snasdell at 12:40 PM 1 comment:

‎Well I say a quick trip, certainly wasn't on the way up here, that's for sure!
The weekend started on Friday for me with a trip to Gatwick Enterprise to pick up my 'small premium' car. After much guessing what it would be, having only stipulated auto, I was surprised to be given a VW Passat CC (Bluemotion) MANUAL. In fairness I was asked if I was that bothered but I said no. Big mistake in some respects.

A few months ago I was actually looking at this exact car, but in auto and GT guise. But having driven a manual‎ Bluemotion, I have to say I would take one of these now. Lovely spec inside, ridiculous motorway MPG, smooth, lovely on twisty roads. So that's a plus for sure.

The trip here took some 7 hours due to stupid traffic conditions, and looking at the weather forecast, and what I'm sitting in now, the trip home isn't gonna be much easier.

Arriving at the Travelodge I was dreading first morning back ache from their ridiculous beds, but to my surprise they have teamed up with Sleepeze and replaced all their beds, and I must say, very nice indeed! Might even buy one. There is a little brochure by the bed telling you how to buy one if you enjoyed your sleep. Imagine that, try before you buy, first on the car and now the bed too. Good trip.

The reason for the trip, simple. One year ago today my aunt passed away, ironically some might say, on her sister (my mums) birthday. Mum left us in 2011. So this year on their anniversaries I made some changes to the family plot to make sure they are remembered, and there is somewhere to come to to pay respects to the whole family.
Two little engraved granite cubes with their details on. Small but effective :)

So they are in place now.

I have also travelled about to my favourite locations this weekend with my camera, to do some experimenting with it, and am quite happy with the results.

While talking to Chris, Joan's ex carer, she asked me for some information about tablets (electronic not medical), and showed interest in buying one. I have for a while now been looking for some way of saying thank you to Chris for all she did, so I popped out last night and bought her the Samsung Galaxy Tab 3 10.1, which was on her shortlist. She was a little shocked when I dropped it off in a flying visit last night. But no doubt my afternoon will be spent setting it up for her now lol.

So, I'm sitting on the prom between Rhos and Colwyn Bay now, in heavy rain, strong winds, and hazy skies. Waiting for it to be late enough to pick Chris up to visit the family plot to lay flowers. Thankfully the tide is out, or I would have been washed away by now.

So I better get on, then wrap the day up with what will hopefully be a speedy and trouble free trip back to London.

Will the car have made the whole weekend on a single tank.... time will tell.
Sent from my BlackBerry 10 smartphone on the EE network.
Posted by Michael Snasdell at 10:25 AM No comments:

This evening, a week on from my first visit to Purley Cross since the news highlighted that the Purley Cross underpass at Tesco's would be flooded on purpose to help save the Kenley water pumping station, I returned there to see how things had changed. I have to say I was somewhat shocked at how things had developed, and just how much work the London Fire Brigade was doing,around the clock there.

The A22 coming into Purley Cross is now very much a man made river. Local roads are sandbagged as low laying parts of them fill with water. It really is quite a scene.

I took some pictures on my travels, as well as speaking to a few of the fire fighters, both praising and thanking them for their efforts. Its not even my home they are trying to protect, but somehow I felt compelled to thank them all the same.

The first location I stopped at was by the Purley Oaks recycling centre, on the roundabout by Capella Court. The fire services were staged there with pumps going, sand bags at the ready, and lots of tenders and staff on site. One kind lady from Capella Court was keeping them supplied with hot drinks, on what was a rather cold evening. A few pics from there are included.

Then it was down to Purley Cross, Godstone Road, the A22, which as I say was very much closed off and flowing with water at quite a rate. The underpass at the junction of the A22 and A23 was about half full this evening. Most of the fire crews were up the Godstone Road, around Dale Road which looked to be under a couple of feet of water at its lowest point.

So I shall leave it there for now, and leave you with the pictures. Sorry for the quality, some idiot forgot his tripod! (amateur) 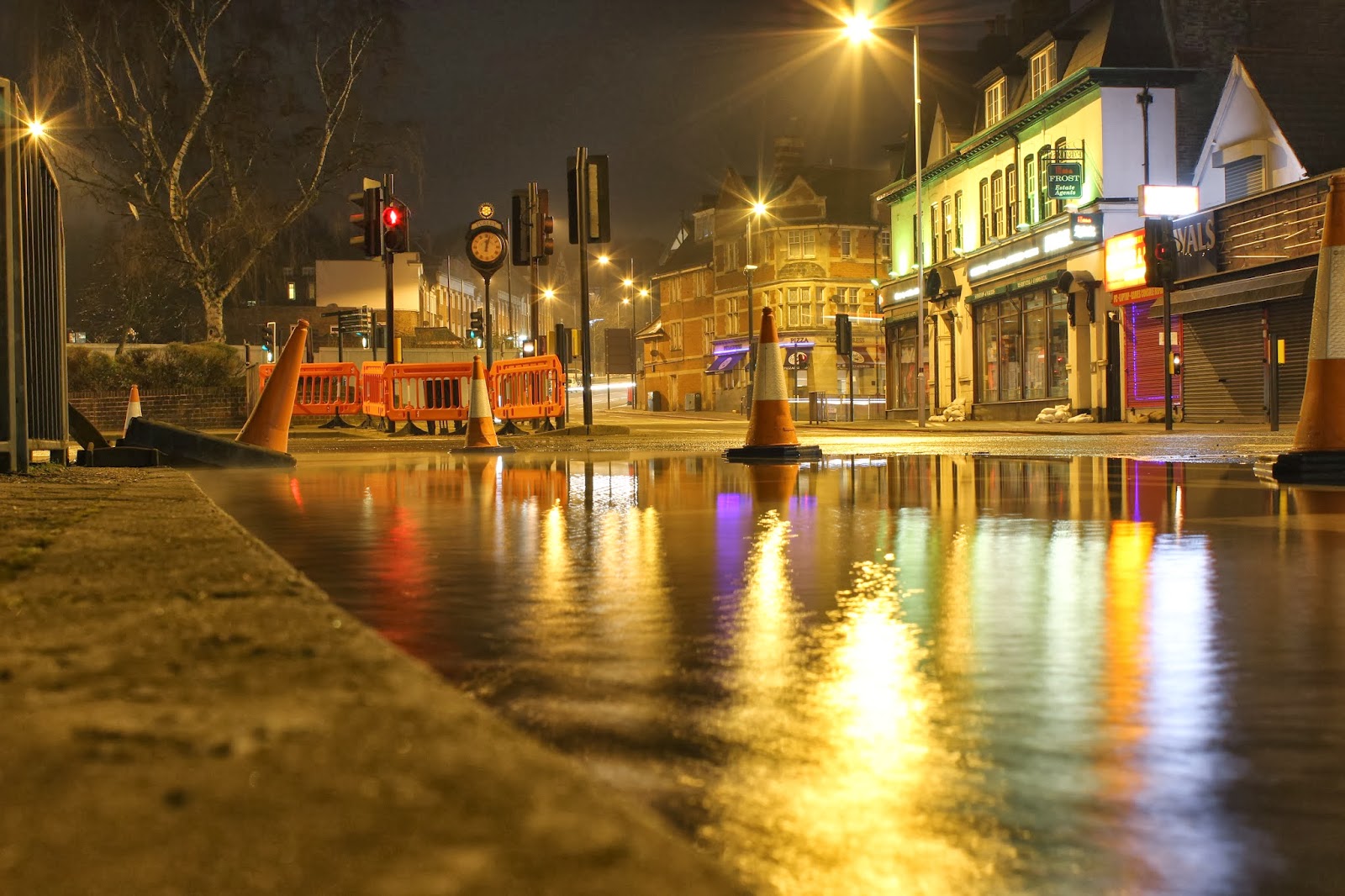 I wish I could work out what my brain was doing right now. After a long period of over activity, medication, stress, then 'relief'. Now most family matters are settled, I am not in a bad financial place, health doesn't seem too bad, and have even had a little bit of luck with the whole finding the package (Random acts of kindness).
But for some reason over recent weeks my brain has refused to shut off. Laying awake late at night, mulling over the most trivial things you can think of. No longer how will I pay for something, but which one do I want. Thinking things over is all well and good, but I like sleep too.
I have done a number of things to aid sleep, counting, relaxation exercises, and even mild meditation. All of which I should say work fine, but it's just such an effort. When the body is tired I would like the brain to join in and switch off.
In other matters of life I can't complain, things seem ok, and I am slowly getting the house into a respectable condition, next big job, plastering!
Right, I just wanted to ramble to pass some time, so that's me done for now :)
Happy weekend all
Regards

Sent from my BlackBerry Q10
Posted by Michael Snasdell at 10:28 AM No comments:

Thank you to Ira Jones and the company they work for, Beachbody.com , and Anna, a complete stranger.
Back in Dec I ordered P90X-3 through a BB coach, but in my infinite wisdom I sent the package to the wrong house on the right street.
This wasn't realised until the delivery came and went, but when it was realised I felt that sinking feeling you feel when $200 falls out of your pocket.
When I checked and found out the package went to the wrong address I went through a long process of trying to find a way to get it back. I had the address, but on speaking to my friend who should have received the package it became obvious it was not going to be as simple as you might think.

As time passed I put the matter to the back of my head, but last week it would not let me rest. So after a late night live chat with a Beachbody sales person, I was put on to a way of resolving the matter. However taking a slightly different approach I tweeted at +Beachbody  and @CarlDaikeler the CEO of the company. To my amazement I received an email from Ira Jones from BeachBody Consumer Affairs within half an hour of the tweet, asking how they could help.

Within a short exchange of emails, they had the full tracking info looked into and confirmed, and offered a free of charge replacement of the $200 goods, even though it was 100% my fault. To say I was shocked and delighted is an understatement. I supplied them with the correct address, and vowed that I had not given up the cause just yet. Grabbing the Chromebook I quickly typed up a letter, and on getting into work I Fedex'ed it to the address I had accidentally sent the package to. The letter basically explained what had happened, and asked them to email me, or contact my friend in the US.

The next day as I stared at the tracking screen for the letter to be delivered, I wondered how this complete stranger would feel getting a letter from Fedex, sent from 4,000 miles away by a complete stranger, asking for their help. The proof of delivery appeared on the screen, I held my breath (not literally). A few mins later my phone pinged, and I had an email, from Anna, the complete stranger, from the wrong address. Explaining she had forgotten all about the package, and would take it to the right address asap. My face lit up, I don't mind admitting.

Contacting Ira again at Beachbody, I told them of the great news, and that I would return the replacement they were sending out asap.

Its amazing how the seemingly simple acts of a complete stranger, can have such a profound effect. The kindness of a company, the helpfulness of a stranger all resulting in the release of stress from me, and the receipt of a gift for a friend. Strange how some thing just happen like this, with just a little bit of common sense.

So thank you to Ira, Anna, Beachbody and Fedex for making this crazy little story happen.


Posted by Michael Snasdell at 2:19 PM No comments: