A fitting ending to an era

Finally at the weekend it was time to carry out the final act in what has been a long 2 years since mum passed away, and 6 months since Joan left us too. As per Joan's written instruction, and mums conversations with Joan previous to them both departing, their final wish was to be scattered at sea. Mum just wanted to be in the water, Joan had been more specific choosing a spot just off the shores of Puffin Island. Arranging it in its entirety, a guest list had be drawn up, a yacht chartered and a sailing plan sorted too. There was nothing for us to do but be carried along on their final journey out to sea.

Chosen for the trip was The Mehalah, a lovely yacht with a great little crew. Amazingly the skipper of the boat was actually Joan's chiropodist, so it had gone from a simple medical service, to a friendship and planned journey. The sad part is that Joan was never able to sail on the Mehalah, so this would be her only trip. 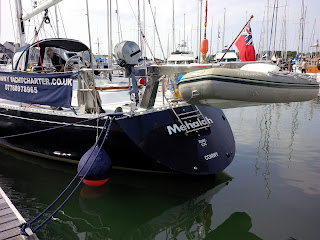 Boarding the boat at Conwy Marina, with a few close friends and family, we soon all found our positions on board, and got comfortable for what would be a nice relaxing and very pretty trip out into what I assume is considered the waters of the Irish Sea. Just off the coast of Anglesey to its most eastern tip where you find Puffin Island. I have added a pic of the starting point, and where we sailed to. A marks the starting point at the marina, the star is where we stopped.

The conversation was general on the way out, not about anything specific, just picking up on topics that came of what we saw as we sailed out. Once we arrived at our destination however it became more focused. With Chris reading a small passage she had written up, before committing Joan's ashes to the sea, followed by my sister and I taking a moment to say goodbye before making sure mums ashes were sent over also in a timely manner to take their final journey with her sister.  Flowers in the form of roses and lilys kindly supplied by Chris and Stephanie accompanied them over.

From the moment the formalities were done with, the mood changed to a more upbeat tempo and one which took the time to remember the ladies, and stories of things they said and did over the many years we all shared with them. This of course was what both wanted, happiness and memories, and no sadness in peoples hearts. Finally arriving back at the marina, and just beating the weather in, suddenly things felt very final, but in a positive way. We had done right by them both, and til their final journey all they had wanted had happened as they wanted it to.

So forever more, there is a final place, a location which is where they now belong, and somewhere I can use in my mind, and in my future tribute tattoo's etc to mark an eternal memory of them both. 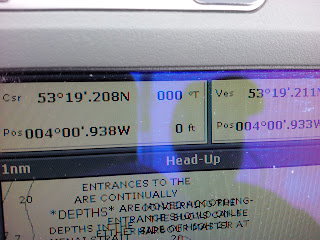 The scattering of the ashes was without a doubt the one reason for being in Wales this last weekend, however I have never been one to waste a good opportunity, so I tried to fit in as much as I could. So here in addition to the above is what I got up to over the weekend, and what I saw and did.

Arriving in Wales late on Friday night, the last hour of the journey was filled with a beautiful display from the skies as I drove up the M56 and A55, changing colours, formations and general pretty scenes. On might suggest it was the heavens welcoming the ashes of mums ashes back to her home town for the first time in over a decade. Finally bringing her home to rest and reunite her with her family. Other will simply say coincidence.  Unable to really stop to take pictures, I resisted the best I could until the right opportunity presented itself. Finally on the promenade of Colwyn Bay, I did however manage to take this stunning shot as the sun finally set over the hills of the Orme. 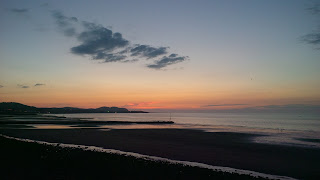 As pointed out by a friend the main cloud in the sky is almost the formation of an angel spreading its wings across the skies. Either way, its a beautiful welcome home for mum, and a relaxing sight for my now tired eyes. What better way to settle and get some sleep for the big day which lay ahead.

The following morning I was up early, and started the day in the most relaxed way I could think. Breakfast courtesy of McDonalds at the top of the Great Orme in a deserted car park. These were the scenes which greeted me Saturday morning. 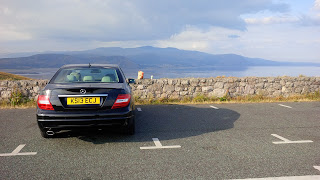 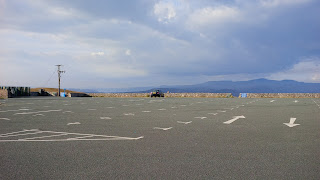 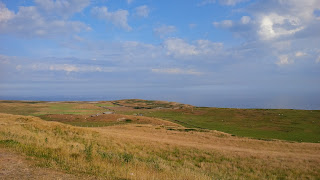 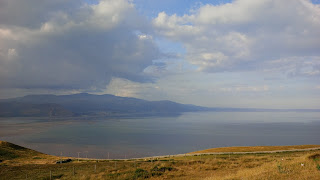 A small group of Starling were hanging around in the car park, occasionally taking flight for a short moment, then settling again. As I sat on the wall in front of the car, a large wooshing sound erupted from down the hill, and in a flash, a whole flock of starlings raced up the hillside in flight, and as they did so, the small group took flight, and were carried away in the much larger flock. Taking to the skies, they flew down the other hillside and out towards the bay. Like collecting a spirit. You can see all my thoughts and emotions this weekend had double meanings. Not being a spiritual or religious person, sometimes its hard to understand why so many almost meaningful things happen at a time like this. Or another way to see it is that at times of emotion, you look for other meanings in happenings to help cope and deal with what is happening in your life (that's far more me)

After getting some breakfast in my stomach and waking up a little, the next destination was back at the house to meet the estate agent. After recent discussions it was agreed we would meet up at the house to discuss the plan for selling it, and make some decisions on what the best strategy was. 9am is early for a meeting at the best of times, especially after a long drive the night before. But arriving a little early I was pleased to see Karen had also, so we got underway.  Lots was talked about and decided, so hopefully things are all heading in the right direction there.
The house is currently listed here....

Next on the list for the busy day Mochdre, or the Colwyn Bay Crematorium / Cemetery to be precise. 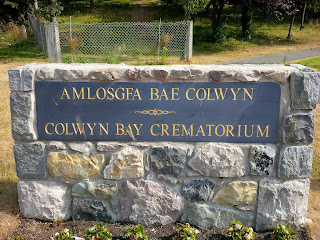 As I say, far from being spiritual, it was more moral duty and desire that brought me here. Now the self appointed keeper of the family grave site, I decided that I would take some time to make sure all was well with it, and at the same time have a little chat with mum and Joan's mum and dad who are laid to rest there. Sadly I never met them, however I thought it would be fitting to let them know their girls were coming home to be with them, and to let their sister Mary know the same, who is also laid to rest there.
Sadly the grave doesn't get too many visitors these days as family is few and far between, so I made sure things were tidy and presentable, adding a small mini rose plant there for some colour.

Forgive the slightly strange pictures included in this blog. No offence is meant to be caused by them, and they are mainly there for my memories, and for anyone interest. Not to in anyway glorify anything. 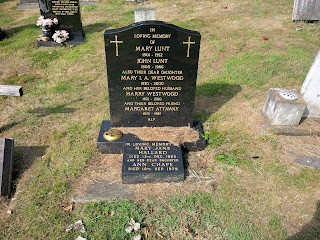 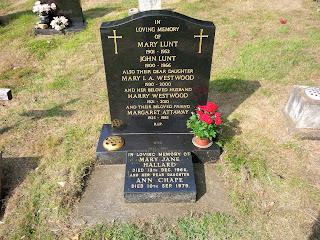 Once that was done, it was time to take a breather and some time to myself, getting mentally ready for the little trip ahead. Heading off to Conwy for a relaxing walk to the marina, I enjoyed a scenic drive, then took some time to get everything sorted (and mum in a bag) for the journey. Of course we know what happened next, its all written at the top :)

The following day, Sunday, I was up early again, and decided it would be nice to take a trip to Llanberis and Snowdonia for a relaxing drive, and some peaceful scenery for the morning. So off I went up the A55 and turning off to head into Llanberis to take a seat by the lake, and breathe some lovely fresh air, to the sounds of birds and sheep. The scenery around there has always been stunning, and is somewhere I like to spend time when time allows for it. Its one of those places I can happily be with or without company, and spend hours just looking out into the hills. So here are a few shots for you to share, and a couple of videos of the trip up and back down the winding mountain roads up to the Pyg Track path. 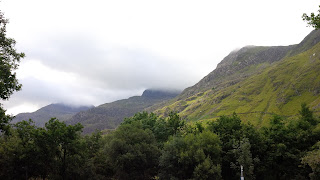 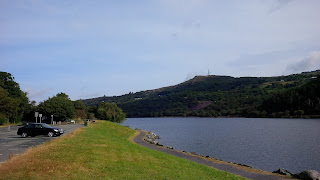 The last port of call for the day, quite literally, was Caernarfon and its wonderful castle. Still early in the morning I decided I would get there, park in the grounds and grab some breakfast, before taking a walk around and taking some snaps, as well as taking in the sights. So here are those snaps. I have to say, Caernarfon is probably one of the most beautiful and bold, in tact castles in the UK. Make your own mind up. With the tide low, and the boats stranded, it looks a little bizarre, but a pretty sight all the same. 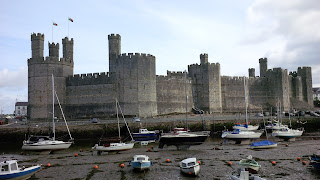 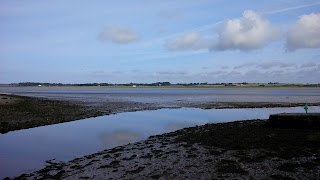 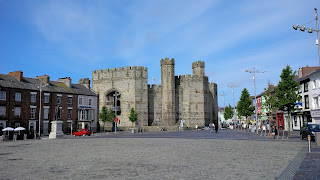 So, in reality, here ends another little chapter in my life. Mum is laid to rest, Aunty Joan also. The whole Lunt family legacy is complete, and the family is once again back together in North Wales where it all begun 113 years ago with the birth of my grandfather John.
So, to John and Mary Lunt, my grandparents, Joan, Mary and Ann (mum) Lunt, may you all rest in peace for an eternity back in your home together again. R.I.P x
Posted by Michael Snasdell at 2:13 PM No comments: